IF YOU ASPIRE TO SERVE THE LORD - Story Of My Vocation 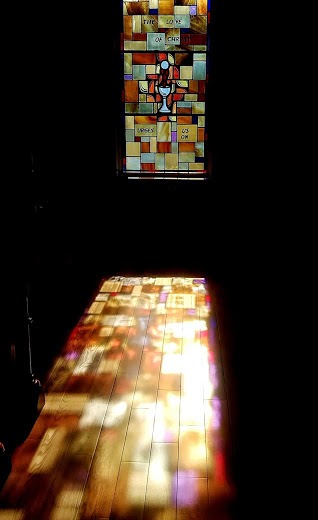 God often speaks to me through music. I’m at home watching the Late Late show in the mid-1990’s. There’s just Mam and me with the couch pulled up near the fire. I’m going through a bit of inner turmoil, feeling that I’m not living up to my calling as well as I should. Then on comes Charlie Lansborough. I’m not into country music but, when he sings “My Forever Friend”, tears well up in my eyes - not out of guilt or sadness but they were tears of recognition. I felt the inner conviction that Jesus is my forever friend.

This conviction is better expressed for me in the song by Delirious? - “What A Friend I’ve Found”. It’s the song I want to die to because it expresses what I live. My life, my vocation is based in my friendship with Jesus.

The story of my vocation is not a dramatic one in that I didn’t go through a big conversion experience. When God says to the Prophets “Before I formed you in the womb I knew you; before you came to birth I consecrated you. I have called you by your name. You are mine.” I know what this means. I feel it! Because of it I know that I have been destined for priesthood from my mother’s womb and even before that.

Sometime after I became a priest, my mother told me that back in 1953-54 she had been afraid of becoming pregnant. She already had a one year old girl, Maura, and she was afraid of pregnancy. So she had a dream one night that Our Lady came to her and told her not to be afraid and soon after she became pregnant with me. At some stage during the nine months Mam had two other dreams. One was that Our Lady came again to bless her and the child in her womb and the other was that Pope Pius came to bless her and the child. This doesn’t mean that I’m any great shakes but it has helped me stand firm in the life for which I am chosen. And I believe that what happens when we are in the womb has a significant bearing on our future.

Mam was not overly religious. Just an ordinary faithful Catholic who didn’t go in for excess. My father too was a man of simple faith.

I’ve always had an instinct for God, an attraction for Him and I’ve always wanted to be a priest at the altar for as long as I can remember.

During the Easter holidays of my leaving cert year there was a general vocations workshop on in the Redemptorists down the road. I had planned to go but when the time came I didn’t feel like missing out on the holidays. My mother said “maybe you should go all the same”.

So I went in obedience to Mam and I met Fr. Vincent Kelly the Pallottine Vocations director who made a deep and joyful impression on me and he invited me to visit the community in Thurles. I fell in love immediately with the place, the community and I knew that I had found my home. Vocation is about finding one’s home, our place and state of belonging in this world.

I was on a high after my visit to Thurles and determined that it was there I would live. My parents were a bit frightened because no one had ever of the Pallottines and Mam was sure they might be a sect or at least a "strange crowd".

But God is good! Mam told one of the neighbours of her concern about the Pallottines. The woman told her she need not worry because two of her own neighbours from near Tuam were Pallottines and that they were lovely.

I have heard others talk about the austerity and coldness of seminary life but for me there was nothing austere in the Pallottines and there was great warmth.

That’s how my vocation began and it was a very innocent, uncomplicated beginning. Within a few years I was to go through a strong sense of self doubt, a sense of being totally unworthy of being a priest.

Over the next 42 years I was to learn how God shapes us and forms us through struggle, suffering and sin. As the Book of Sirach says “If you aspire to serve the Lord, prepare yourself for an ordeal” (Sirach 2) - not a great way of trying to attract people to a way of life. But it is true that we cannot become anything worthwhile in life without the cross.

What has held me together in all of it is the Eucharist and the Word of God; I have learned the meaning and power of obedience from Mary at the Annunciation;I have found meaning in ministering to other people, finding Christ in them time and time again. Family, community and friends are also essential in helping us stay on the road that God has marked out for us.

A vocation is like climbing a mountain, doing the Camino to Santiago - demanding, difficult, involving risk and it is thrilling. On this day 34 years ago I was ordained a priest. I am now 59 years old, serving as curate in Shankill and I am truthfully having the best time of my life. Thanks be to God.

I have been chosen and I have decided to follow Jesus - no turning back. This is the song we sing.

Before I Formed You In The Womb Charlie Lansborough Delirious? God Jesus Knock Pallottines Sirach vocation